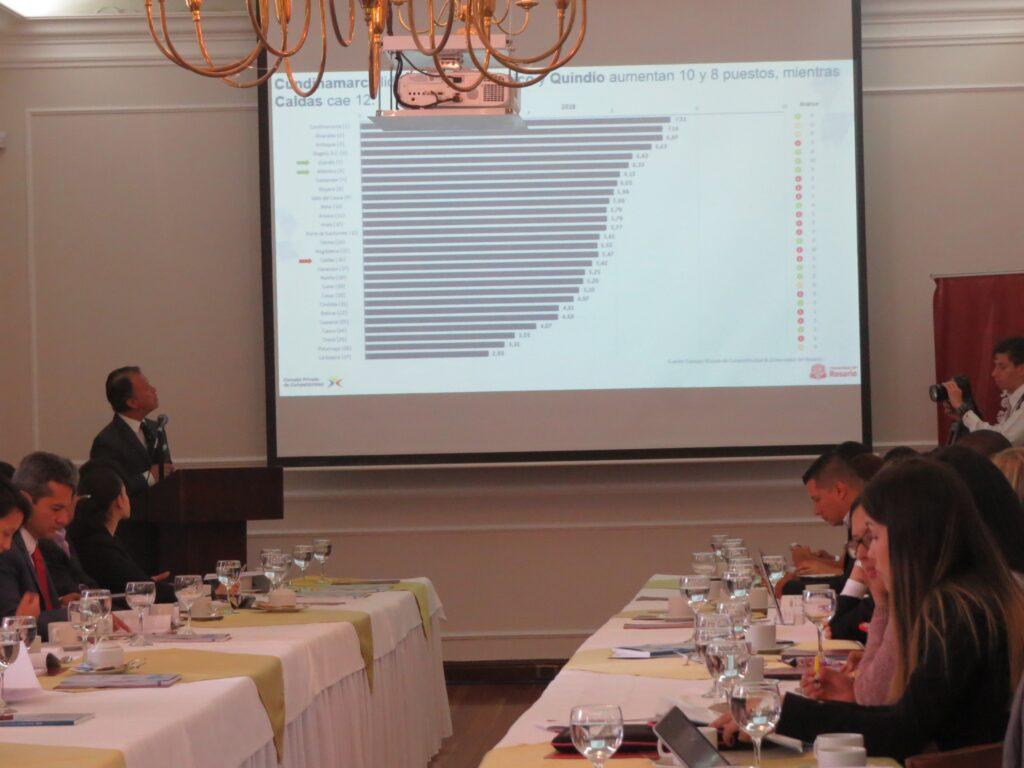 Huila's department has great challenges to be more competitive, such as the Competition Department 2018 (IDC) calculated by the Private Competitiveness Council (CPC) and the University of Rosario.

According to the document that measures the competitiveness departments and their progress in economic development, Huila obtained a rating of 4.35 out of 10, with a decrease of 0.13 points compared to the score obtained in 2017 and a fall of two. places in the general classification. The first places were taken by Bogotá, Antioquia, Caldas, Santander and Risaralda.

"These pillars constitute a convention of intervention areas, in which regional and national authorities can implement key interventions, to improve regional competitiveness and, in order to achieve clear achievements in economic and social development," he explained. Rosario Córdoba, president of the Competitive Council of Competition.

Transparency of the use of rights, the killing, kidnapping and captivity, effectiveness of justice, status of primary roads, as well as the number of postgraduate graduates, time of appointment of medical appointments, number of hospitals, Mobilization of air passengers and penetration From a fixed broadband internet were some of the topics evaluated in each of the departments.

"This is an important tool that allows departments to evaluate how they are doing and where they go. It is important that they take ownership of these results, analyze what they are doing, what needs to be improved and what should continue to grow. There are many departments , who really take these results seriously and are working to improve, they guide us what we show there to change and be more competitive, "he said in dialogue with LA NACIÓN.

How are you Huila?

The Huila was located this year in a position 18 out of 27 regions, behind Magdalena and above Nariño, departments that occupy positions 17 and 19 respectively.

From the ten pillars, measured by the Department of Competitiveness Department (IDC), Huila faces major challenges in Innovation and Business Dynamics, one of the lowest scores (1.22) occupies position 23, because it has insufficient investment in scientific activities, technology and innovation, ACTI and high quality research and indexed magazines, also register very low punctuations in other indicators such as industrial properties, net trading birth rates and commercial density.

Another pillar to improve is the one of sophisticated and diversifying, where a position fell on the previous year, it's in the square 19 with a score of 3.06. This decline is a consequence of the lower diversification of the department's export basket and productive capabilities.

In Higher Education and Training also shows a critical panorama, occupying position 18 with 3.23 points. This is the result of the low number of students enrolled in the different programs, postgraduate diplomas and the high-rate rate in higher education, except for the lack of command of a second language.

However, it stands out in the Equilibrium-Pillar in which it reaches its best rank (6.89 out of 10) and occupies the fifth position in the general classification, thanks to the conservation of the percentage of protected areas with respect to the entire territorial area and the surface covered by a natural forest. Besides having companies with the ISO 14001 environmental certification.

Additionally, Huila emphasizes for his performance in the pillar of Basic and Medium Education, in which he occupies the sixth place, with a score of 6.55 out of 10, improving five positions in this pillar between 2017 and 2018. Due to the increase in primary students , secondary and high school age enrolled, investing in the quality of education among others.

It should be noted that between 2017 and 2018, Huila lost positions in nine of the ten pillars considered in the IDC. The pillars, in which the largest decrease was recorded, were the pillars of Institutes and Infrastructure, reporting in both cases a fall of five posts compared to 2017. In the case of institutions, the diminution is largely explained by low-level fiscal administration, As regards Infrastructure, Huila has the latest positions in public services and ICT infrastructure.

"It's a harsh reality about which we must act"

The president of the Neiva Chamber of Commerce has expressed his concern about the results launched by the Competitiveness Section 2011.

"Indeed we were very optimistic, thinking that we would win one or two positions, but the truth is that the results did not go with us, other regions progress much more than ours, we lost two positions and that's not good," he said. dialogue with the LA.

"I have mixed feelings with these indicators, because we even have an accredited university that we did not have, but the output is very difficult for us. There are other indicators that must be analyzed and seen what happened to us, but to solve a problem , first we must recognize that there are. The indicators show a real reality about which we must do, "he said.

Corner stressed that competitiveness must be working daily in the department. "I think this should be done daily, not only every year when we know the competition report. There are many things that we must analyze. It is not justified, we have to work. These adverse results must be really understood , the rooms of commerce pay them a lot of interest, we work intensely and many things are improved. "

"I believe we not only call the good of our leaders, but succeed as a national policy of commitment, not only by the governors, as well as their cabinets. Sometimes you are sitting to speak with the office secretaries and do not have any idea about What production or competitiveness is or how it is measured. In the imagination of humans, competition is the embellishment of the chambers of commerce or the bureaucracy of the moment.

He also took the opportunity to highlight the administration of the current government. "President Ivan Duque, is doing something that is very good and cares about this matter that must be taken with all the seriousness of the world because at the end of this day it has to do with the quality of life of humans and their wellbeing, it must Be understood so much and that all the regional leaders assume it like that. It's a big challenge, "he finished.