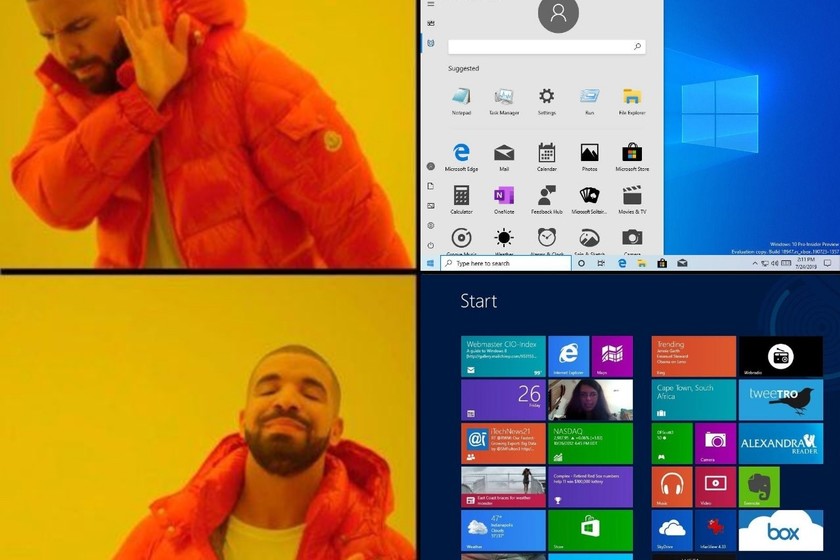 A few days ago, Microsoft mistakenly revealed a new start menu for Windows 10 which brings a pretty significant change to the interface we currently have: it completely removes the "Live Tiles", which were introduced with Windows 8 in 2012.

Rarely Steve Sinofsky, the person responsible for this version of Windows, one of the worst received in the modern history of the operating system, did not want to miss the opportunity to mock the design and also criticize it from his Twitter account.

Sinofsky quoted a tweet from Tom Warren in which he explained that Microsoft confirmed that the leaked menu we saw was in a Windows 10 build released by mistake.

The one who was president of the Windows division for several years, and Windows Development Managerwrote mockingly so yes that mistake what they were talking about was the launch of the building, or the design of that menu.

Also take the opportunity to criticize that the design of this menu take away user selections and offers a list of solutions of everything they could do differently and "better" to locate the search icon.

"Metro would have been better"

Who took my start menu?

The best part is maybe when someone tells Sinofsky that Metro would be better and he totally agrees. The responses on Twitter range from people calling him a troll, to those who directly say so everything is better than windows 8and what they are happy that Metro is dead.

There are probably users who liked the Windows 8 start menu and the Metro interface, but the failure of those changes in the operating system is undeniable. When Windows 8 removed the start menu and brought that thing to the full screen, as the only option, the reception was so poor that only a year later Microsoft came back and returned the menu with Windows 8.1.

Today, Windows 8 has even less market share than Windows 7 or Windows XP itself, let's not say the design was to blame, but it helped a lot. Metro has been replaced by Flow Design, and Windows 10 is still dealing with spell tricks on an interface that doesn't end up unifying after the changes introduced by Windows 8.

That new menu of Windows 10 may be incomplete, or some may not like it, or terrible to many, but when criticism comes from the brain behind Windows 8, it's at least ironic.