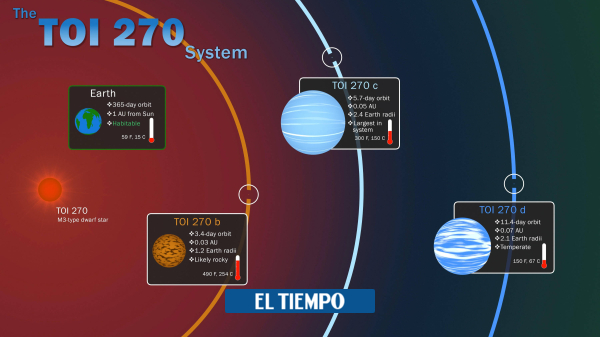 Nasa Tess' planetary telescope "hunter" has found three exoplanets that could be the "missing link" to understanding planet formation, as they encounter completely different characteristics from those of anyone known to date.

The "Tess" satellite was launched last year by Cape Canaveral with the mission of analyzing about 20,000 exoplanets and examining the possibilities that in some of them the necessary conditions are needed to house a living. Researchers from scientific and academic institutions in several countries analyzed data from the "Tess" and published the results of their research in the journal Nature Astronomy on Monday.

Of the three new "exoplanets" discovered now (named TOI-270), one is rocky and slightly larger than Earth and the other two are gas and measure about twice as large as our planet, according to the University of California, which He led this survey.

The new "system" – three planets and their host star – was named after being the "object of interest" number 270 discovered by NASA's Tess Object of Interest satellite.

The smallest of these bodies discovered now would also be in a "habitable" zone – at a distance from its closest star far enough to allow the existence of oceans of liquid water -, according to data provided by this university.

"We found very few planets like this in habitable areas, let alone around a star with those characteristics," said scientist Stephen Kane, a professor of Planetary Astrophysics at the University of California, and confirmed that no one is in the Solar System. a planet like that.

In the Solar System there are small and rocky planets, such as Earth, Mercury, Venus or Mars, and much larger ones, such as Saturn, Jupiter, Uranus or Neptune, but not "medium" like those now found. The researchers believe that the new discovery will allow the study of the "missing link" between small and rocky planets like Earth and the largest and gas-dominated ones, like Neptune, and determine, for example, if one of these planets ever has had an ocean with liquid water and if it meets the right conditions for life.

The data from the "Tess" indicates that it is unlikely that the smallest of the "exoplanets" has discovered life, because the surface is too hot, but the other two, located at a greater distance from the star, do. they could be cooler and therefore allow water to accumulate on the surface.

The research also involved scientists from the Massachusetts Institute of Technology, who agreed that one of the "exoplanets" discovered now is in a "temperate zone" that would place it in a range of temperatures that could support some form of life. .

The intermediate size of the new planets is, according to this institute, "ideal" to know if small and rocky planets like Earth and larger ones like Neptune follow the same path or if they evolve in any other way.

The scientist Francisco Pozuelos, currently at the University of Liège (Belgium) and a research fellow at the University of Granada, in Spain, considered that this can be a great laboratory to better understand how planetary systems form and evolve, given their size. of the planets are very different from those already known.

Its "hospitable" star is also particularly bright, and although they tend to be very active and with frequent Bengal and solar storms, it appears to be very old and "relaxed", so it emits a constant glow that allows scientists to observe and study better. .