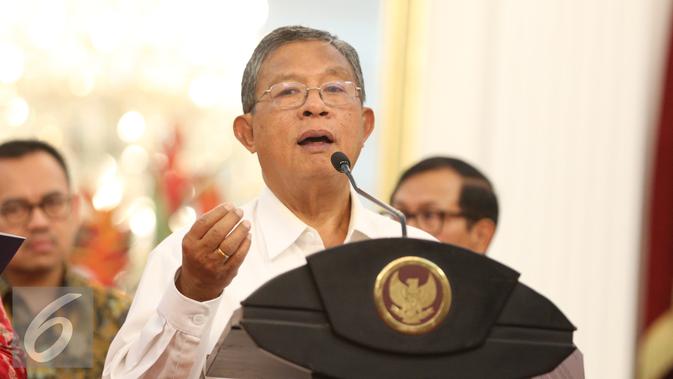 Liputan6.com, Jakarta – The government through the Ministry of Coordination for Economic Affairs hopes that the expansion of the economic policy package XVI can increase investor confidence. It is also expected to increase the supply of the dollar (US) currently required.

Coordination Minister of Economic Affairs, Darmin Nasution, said that to date many funds do not return to Indonesia. The government also seeks to attract funds back to Indonesia to help the economy. One of them is by strengthening foreign exchange control by providing tax incentives.

Control in the form of duty to include DHE from the export of products produced by natural resources, namely mining, plantations, forestry and fishing. Tax incentives in the form of giving final tariffs on income tax on deposits.

"There is a question of whether the foreign currency is controlled by export control fortune. We are not capital control. We do not handle incoming capital. We worry that if we export natural resources, we want the money to enter. Foreign exchange rates. In foreign currency deposits, we provide more incentives in the form of taxes. We prefer to change rupee. After the exchange will end, it will go to the Bank of Indonesia, added the US dollar. If it is not replaced, you will not get there, you will remain in the bank, "he said, as written on Saturday (11/17/2018).

Therefore, he expects the policy to increase the supply of the dollar. Moreover, Indonesia needs capital, especially from foreign investors.

"Our capital is not enough, government bonds listed by foreign investors reach 39 percent, while 60 percent to 65 percent of foreign investors are in stocks, Malaysia is no more than 12 percent. Savings In Indonesia, the investment can not be achieved, "he said.

According to Dremin, there was still no concept of low savings in Indonesia, so it was not enough for capital financing. Therefore, the government invites foreign investors. There are a number of things that make the concept of savings still low. First, consumption of Indonesian people is quite high, which makes it difficult to maintain. "Secondly, there is money that was brought and not brought to Indonesia," he said.

In addition, Darmin said, people also prefer to spend money to buy land so it is difficult to spend. "The price of land goes up 50 times but the money is dead, so the savings were not able to cover the investment," Darmin said.

In addition to regulating foreign exchange proceeds by expanding the economic policy package of XVI, the government expanded the holiday tax reduction facility to encourage direct investment in upstream and downstream industries to stimulate economic growth.

The Government is also complying with the provisions as set by the Minister of Finance Decree No. 35 / PMK.010 / 2018 regarding the provision of corporate tax to the reduction of income tax.

"In fact, we went to the tax holiday to invite investors, and then we saw a lot of goods, create a lot of goods if the economy grows, imports a lot, this tax holiday is an effort to identify the hole, you can invest here incentives for the production of goods.

According to him, there are a number of business sectors which are encouraged to be able to produce products on domestic, so they reduce imports. First, iron and steel groups. Second, the petrochemical group. Third, in the agriculture sector.

In addition, to increase investment by relaxation of a negative list of investments. The government again revived the list of negative investments (DNI) as an effort to encourage economic activity in the leading sectors. This policy opens up opportunities for local investment (PMDN), including small and small enterprises (MSME) and cooperatives to enter all areas of business.

"In the short term, we hope that the policy coordinated with BI will trust fund holders to enter quickly, we will slow down later, perhaps the time will be shorter," he said.

Meanwhile, Central Bank of Asia economist Tabak, David Samuel, said that the government's move to issue 16 economic policy packages was positive. However, things need to be concerned about the government and the Bank of Indonesia, that is the application in the field so that the policy package runs well implemented.

"This policy should be continuously monitored, how it is implemented, there are 16 economic policy packages but not yet 100 percent," David said when contacted Liputan6.com.