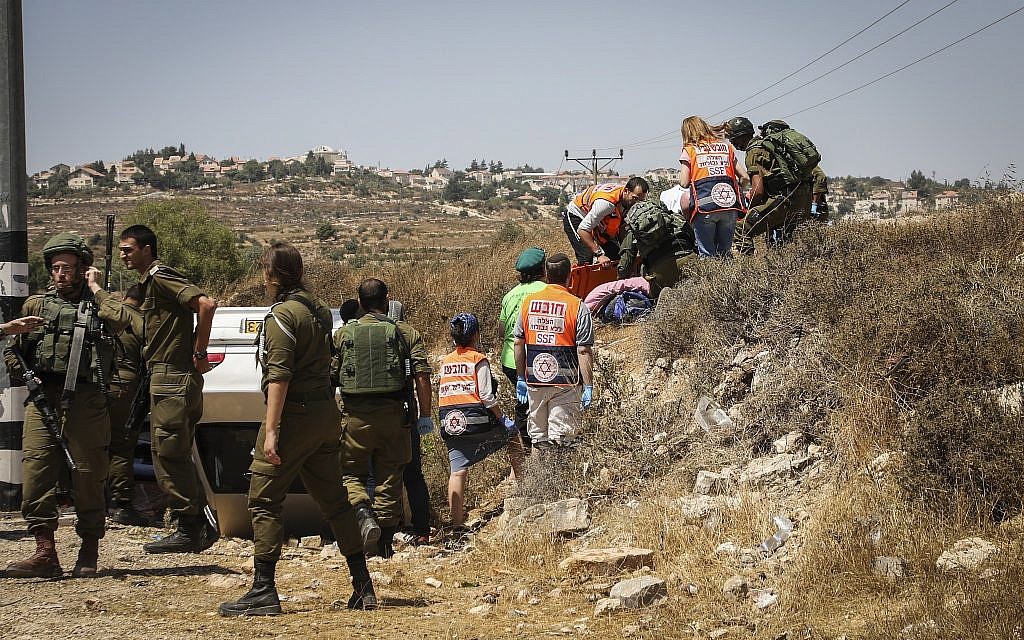 Nahum Nevis, 17, and his 19-year-old sister Noam were hit by a car Friday as they waited for a bus outside the Elazar settlement.

The car rolled over after the terror attack, and when the assailant tried to emerge from it, he was shot dead by an off duty police officer who was driving behind him.

While Nahum remained sedated and hooked up to a respirator, the Walla news site reported a slight improvement in Noam's condition as she was transferred from Shaare Zedek Medical Center to Hadassah Ein Kerem Hospital, where her brother is.

The director of Hadassah, prof. Yoram Weiss said Friday Nahum had suffered a skull fracture and a brain injury. Doctors at Shaare Zedek said Noam had injuries to her limbs.

The siblings are residents of Elazar.

Video of the attack, which was recorded by the officer on his dashboard camera, showed that the two siblings were not standing behind the reinforced pillars set up in front of the bus stop to protect against car-ramming attacks.

The attacker was identified as Ala'a Harimi, 26, from Bethlehem, who was driving a stolen car.

Elazar is a settlement adjacent to Migdal Oz in the Etzion Bloc, where yeshiva student Dvir Sorek was stabbed to death last week in a suspected terror attack. Also nearby is the Etzion Junction, which has seen multiple fatal terror attacks in recent years.

The assailants were shot by security forces. One of them was pronounced dead at the scene; the second was critically injured and taken to the hospital.

On Friday, Shaare Zedek, where the officer was being treated, said his condition had improved.

The attack came amid heightened tensions surrounding the Old City's Temple Mount, following clashes at the holy site earlier in the week.

The Hamas terror group, in a statement on Friday's attack, linked it to the recent unrest in Jerusalem, saying, "Our nation's rising rage and the ramming and stabbing incidents are a response to the repeated storms of the Al-Aqsa Mosque and the occupation's ongoing crimes. ”