The first galaxy map in the world is completed … Heavy Stars, Galaxies Evolution of Secrets

A segment of our galaxy exposed by NASA on January 10, 2012. This is a mosaic of image fragments captured by NASA's WISE (Wide Area Infrared Radiation). Cassiopeia and Kepesus stars are also observed. [EPA=연합뉴스]

The northern sky has a funny legend. More than 30 degrees north latitude is the story of the five-dimensional group hovering over the year, "Kepesus".

Capsus is the king of ancient Ethiopia (Ethiopia) in Greek mythology. I had a lot of difficulties because of my arrogance. Cassiopeia, whose daughter bragged about her daughter, said: "The beauty of my daughter Andromeda is better than the sum of 50 girls of water nymphs," and the anger of the god Poseidon is bought. When Poseidon sent a monstrous whale to drive Ethiopia to destruction, Capesus was forced to sacrifice his daughter. Fortunately, Andromeda, who has almost become the food of a monster, saves the jellyfish and is rescued by the hero Perseus and becomes his wife.

NASA's Bubble Nebula, the 26th anniversary of the birth of the Hubble Space Telescope, is located in the Cassiopeia array, 8000 light-years from Earth, and a huge cloud of gas and dust illuminated by starlight in the nebula. [사진 미항공우주국(NASA)]

But Poseidon's anger does not stop here, and Cassiopeia turns upside down to become a constellation and continues to circulate in the North Pole. Even today, in the northern sky, Cassiopeia, her husband Capsus, his daughter Andromeda, his son-in-law Perseus and monstrous whales shine together like star systems.

But not only did the legend preserve the place of the frozen. The Korea Institute of Space Science and Science (KAIST) announced on March 13 that it had recently discovered a crib of hidden star formation in the Kepesu region as a multi-purpose infrared imaging system (MIRIS) developed in 2013. It was the first observation that 66 young stars Under 10 million years old, which correspond to the young age of the universe, reside in the Keepeus region. 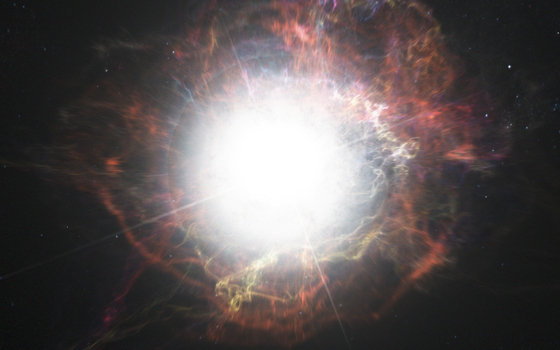 Supernova explosion graphics provided by the southern European flooding in 2014. A massive star, whose mass is more than 15 times the sun, has a relatively large impact on the whole galaxy due to supernova explosions. For this reason, it could be a clue to explore the process of galaxy evolution. [사진 유럽남방천문대]

Finding a place where a star is born is a mystery in itself, but what does it mean by science? "This discovery helps explain the evolution process of the galaxy," explains Kim Il Jong, senior researcher in the Astronomy Group of Astronomy Observatory Astronomy. Specifically, the stars we find are significant because they are a "massive star", which is massive, more than 15 times the mass of the sun.

Heavy stars are born and die by this mass and have a great influence on the entire galaxy. The most representative is a supernova explosion. The heavy stars decorate the edge with the energy that the sun will release for 10 billion years at a time. It's a supernova. The core of the stars is once again becoming a very small neutron star or a black hole. Heavy stars return oxygen, silicon, and iron to the universe they have accumulated during their lifetime in this process. "The heavy star has a great influence on the galaxy itself in this process, so observing these stars is a good clue to see how our galaxy has changed chemically and morphologically," said Kim Il Jong, a researcher.

The Institute of Earth Sciences (MIRIS) developed the first infrared infrared imaging infrared imaging (MIRIS) telescope in Korea in 2013. It is said to be advantageous to see the universe from a low orbit of about 600 km above ground to test a wider range than the Hubble telescope. [사진 한국천문연구원]

The MIRIS telescope, launched in November of Science and Technology No. 3, played a major role in revealing the secret of Capposus. Isaac Newton's National Telescope, watching galaxies on the ground, surveyed the invisible terrain. Using this technique, he was able to produce an accurate map of our galaxy using the "Paschen Alpha", the world's first hydrogen spectrum emitted by the stars, observing a heavy star in the capseus.

Galaxy Map Precision using Paschen Alpha, the first of its kind in the world, to be completed by Korean researchers. The squares in the upper right corner point to the area of ​​freezing and the red light indicates that the strong alpha-fasan is released. [사진 한국천문연구원]

Dr. Jung Wong-Sop, who participated in the study, said: "Newton's telescopes used H-alpha, which is a relatively short wavelength between the hydrogen spectrum, but because of interstellar extinction in which wavelengths are absorbed or dispersed by different materials "MIRIS was able to obtain a more accurate picture by observing the longer wavelength" Paschen Alpha "in outer space rather than on the ground.The younger stars are formed in large dense clouds called the 'ionospheric zones' 39, which use the hydrogen spectrum from these observations.

MIRIS is known to be able to see the entire galaxy because it can observe a wider area than the NASA Hubble Space Telescope observing the universe at similar altitudes. "The researchers plan to find more ionized hydrogen regions in the future, expanding it all. In the journal Astrophysical Journal Supplement, International Authority for Astronomy.