The New Book of Joseph Becher 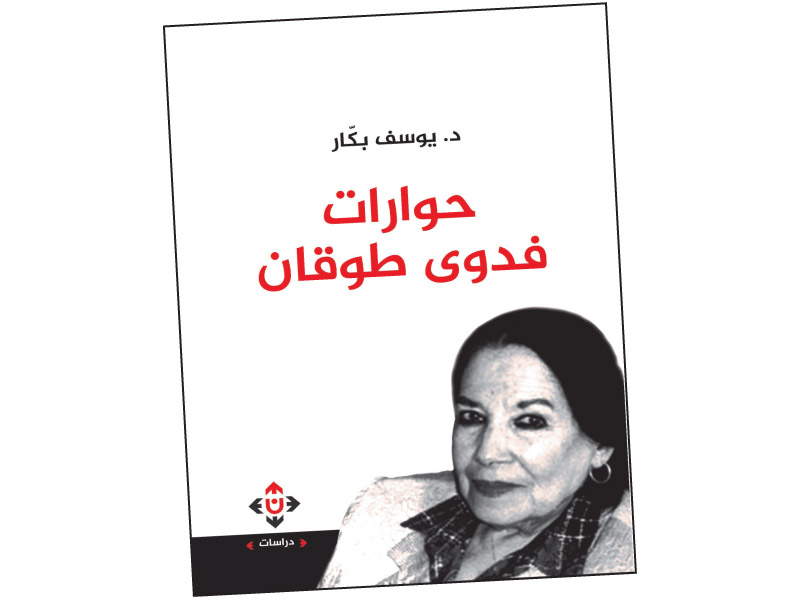 Amman – Nidal Burgan
The researcher, Dr. Joseph Bachar, has not stopped following what he writes about poet Padoa Tukan, and what she has missed from her dialogues. This new edition of the book, recently published by (now publishers and distributors) in Amman, included four dialogues not mentioned in the edition Previous. The importance of the dialogues here stems from the fact that they complement the character of the poet and emphasize her creative, intellectual and political personality.
The book includes eighteen dialogues, arranged by the author in chronological order, and made it a preface to the first edition, and documented the life of the late poet. One of the topics mentioned in the dialogues, which was particularly important, is what was said in her first dialogue about the recognition of love that raged over her – as she says – but she apologized and was ashamed to reveal the fear of the language of society, especially the women. She responded to the poetry ceremonies, her situation and her frequency, as in the old financial term, and the strong relations she had with Mahmoud Darwish and Sahel al-Qassem, and between her and Nizar Kabbani of mutual messages.
In another dialogue, she also expressed her opinion about the importance of the song of resistance and the need for its permanence to play an important role in spreading enthusiasm and the awakening of resistance, determination and steadfastness.
This is a very difficult journey and the most difficult journey, especially since he does not believe in the death of the author or author – as is the case with modern criticism – but the poems are part of her biography poet poet poet his autobiography is in the first dialogues and the ninth.
In dialogues, confessions and revelations about their origin, their literary journeys and the creation of songs, events and contexts that have been created and influenced, such as Rukia, the procession song, the fedayeen, the country, Hamza and Ahhaat in front of the permits window.
In which she repeated what she suffered under occupation, balancing her hair before and after it, not to mention the implications of opinions and opinions of the Arab hair stylist and her position on prose poetry and the commitment she rejects, and other literary genres such as this one is So interested. Many – this time is the time of the novel (Dialogue VIII), and talk about the schools of poetry and symbols, modernity and the general cultural situation and levels of university school education and literary prizes.
In addition, there are references to her friends, especially with Samira Azzam, Salameh al-Khadra, al-Ja'ja ', and Nasek al-Malakis, and their relationship with the different cults, bitterness and vagueness.
The late poet Padoa Toukan was born in Nablus in Palestine in 1917 and died in 2003. She has ten collections of poetry and collections that have been published in more than a few editions, and her poetry has been translated into other languages ​​such as English, Persian, Italian, French, Spanish, German, Swedish, Russian, Turkish and Hebrew.
Dr. Joseph Bachar was born in 1942 in Gesher al-Maj, north-east of Bisan, and received a doctorate in literary criticism from the University of Cairo in 1972. He is a member of the Jordanian Writers' Association, the Advisory Council for Research and Studies at the American Institute for Translation and Translation, Cairo, the Jordan Critics' Association, the Arab Academy for Arabic Language, the Arab Thought Foundation / Beirut and the International Council for Arabic Language / Lebanon. Until the end of the Abbasid period, 1985), the Other Face: Critical Studies, 1986, Arabic Translations Al-Khayyam: Critical Research, 1988, Illusions Abbas, 2001, Achieving Heritage and Criticism, 2012, Dr. Joseph Bachar: A Memory of a Person (Partnership 2013).