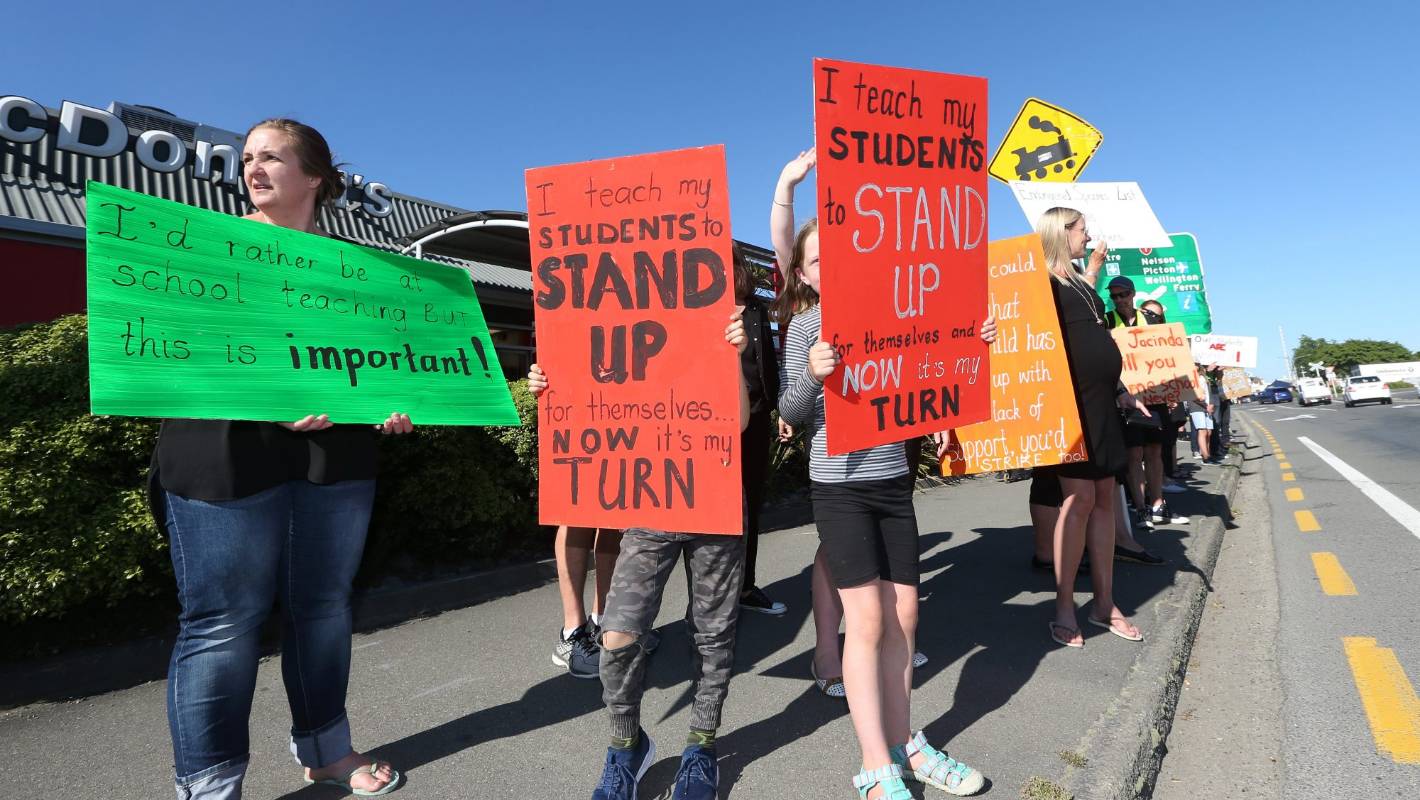 Teachers at Marlboro Elementary School threw their weight behind talks about a historic mega-strike next year and said they were eager to connect with their secondary counterparts in the fight for better working conditions.

But the Middle School Teachers Association of the region says it is too early to even consider a joint strike, since they can still vote to accept the government's revised proposal.

Members of the main teachers 'teachers' union are campaigning for better payments after rejecting a proposal proposed in September, but the results of the national vote will not be known until after the last vote next week.

read more:
* Director announces retirement as Marlboro teachers strike
Concerns about the cultural reactions of teachers abroad
* A huge historic blow can be on the way, the teachers warn

"The issues are the same, no matter what shoe size," Peterson said at a PPTA meeting on Thursday.

Teachers and principals discuss the government's last offer before a shift in the streets of Blenheim.

"The issues are on the workload, the issues are about to be underervalued, under-resourced, lack of funding for students with special needs … it does not attract the best and brightest, or give them an incentive to stay."

President of NZIE Linde Stewart said in Hamilton last week whether the two unions voted to postpone their proposals, could be a secondary strike from two secondary next year.

In the meantime, about 20% of the secondary teachers were aged 60 and over, and the secondary student population was expected to rise by 30,000 to 2025.

Primary teachers across the country have voted for a government proposal that will increase wages, remove accreditation quotas, and improve resources for single-fee teachers and support support for learning.

Secondary teachers discussed their proposal, which would increase most wage rates by 3 percent each year for three years, and the partial removal of quotas on skills for some teachers from 2020.

But PPTA's senior vice president, Eng. Roberts, said the second proposal was not fundamentally different, and would not explain teacher shortages and load problems.

"Our collective skills and knowledge can shape the society of tomorrow, and generations to come," Roberts said.

"We will not stop until the profession is respected and its value will be properly recognized by the government."

Many of the union's requests, such as lodging support, recruiting support in isolated areas, and other jobs in Maori and the Pacific were considered "too expensive," Roberts said.

"The argument that we are entering negotiations is great, it should be, to address the massive challenges of excessive workloads and teacher shortages.

"But what they offer does not come close to the issues we are dealing with. It really depends on us and the public to change our minds."

She asked Marlboro's teachers to reject the new proposal and recommended a second strike next year, "unless a good offer is on the table by then, or if we believe we are close."

The strike will not be the first week of the term, Roberts said.

Patterson said he got the impression that Marlboro's principal teachers would vote to reject their offer. They will probably join with secondary teachers to continue the campaign next year, he said.

"My hope is that we can work together and be united. This is our chance to get a good crack in this."

The result of the national PPTA vote will be announced after the union meetings ended on November 23.