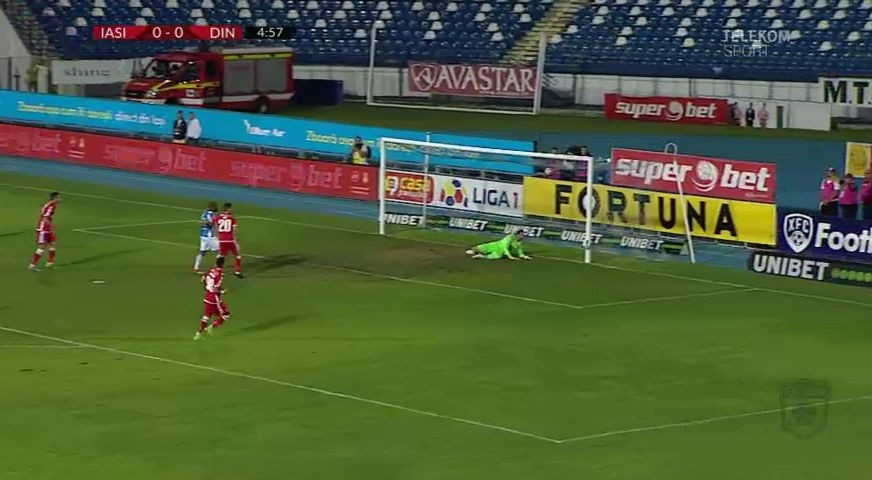 Poli Iasi meets Dynamo on his own soil, in round five of League 1. The match will be live, starting at 21:00, at Telekom Sport 1.

Min 76 Occasion Dynamo: Shot from Mihaiu from a distance, the ball misses the goal

Min 56 Occasion Dynamo: Bru's shot from outside the box, which is a short distance from the post for the goal defended by Rusu

Min 51 Great opportunity for Poli Iasi: Andrei Cristea passes the ball to Platini, who misses by himself, passes Street and leaves, but Sin has an intervention as a goal hitting and stealing the opponent's ball as he prepares to send in the empty goal.

Min 37 Occasion Dynamo: Popa manages to get back to the gate of the corner of the little box, but Russia is careful and pushes away

Min 30 GOOOL Poli Iasi: Horșia scores from the center of the penalty area after a central shot by Haţiegan, 2-0

Min 22 GOOOL Poli Iasi: Breeveeld scores with a header after a corner kick, 1-0

Dinamo, still without Eugen Neagoe, gained the first victory of this contest in the previous stage, with Academica Cliceni. "Dogs" won 4-2 over newly promoted Academica Clinceni, in a match in which Daniel Popa won a hat-trick. Poli Iași is in the play-off spot with eight points, as is FC Botosani.

Only one defeat suffered by the Moldavians in the last six matches played on their own soil, 0-2 with FC Botosani (May 31, 2019), the rest have three wins and two draws. Dynamo has only one win in the previous six trips to the championship, 2-0 at Chiajna (May 18, 2019), during which time it recorded another draw and 4 lost matches.