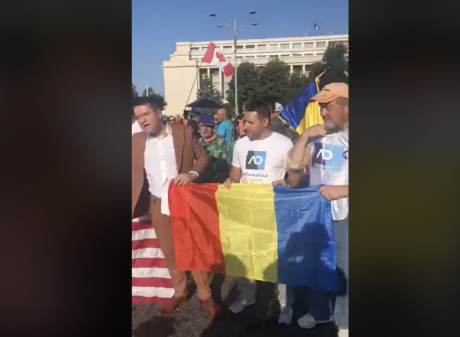 The writer and theologian Mihai Neamțu, a candidate for the post of President of Romania of the Right Alternative, was assaulted in Victoriei Square at the protest on August 10, 2019. The moment was filmed.

The writer and theologian Miilail Neamțu made LIVE talking about the event he attended. At one point, several demonstrators were assaulted, including Marian Ceausescu. They told him there was no time to make politics. Miilail Neamțu was forced to close LIFE quickly. He seemed embarrassed that he was not well received in the Victorian Square at the August 10 protest. The scenes were captured and broadcast on Facebook.

Here are the pictures with Miilail Neamțu interrupted by protesters in Victoriei Square:

Hundreds of people gathered on Saturday afternoon in Victoria Square in the capital, ahead of the Government, re-posting last year's diaspora protests that took place on the same date.

People carry banners with various messages and flags, call for government resignation, have whistles and voices. PSD and the Civil Guard are the target of other protests.