Back to the past

Many WoW players wanted and many were already playing on "illegal" private servers. From August 27, 2019, World of WarCraft in the Vanilla version will be "officially" available to everyone – based on version 1.12 with minor restrictions (keyboards come later). All classes have been revised at least once compared to version 1.0, but that doesn't mean that every class and every specialization on "end-of-content" is really useful – just as it was then. Also "new" content, such as attacks, dungeons, battlefields, events and more, appearing after the release of World of Warcraft 1.0, will be remade in WoW Classic in the same order and later (Content Tiering Details). The Molten Core (Raid: 40 players), Onyxia (Raid: 40 players) and Maraudon (Dungeon) will be available in Phase 1.

Like World of WarCraft: Classic gameplay compared to recent extensions? Well first: much, much, much slower. This not only means a locomotive in the world, because you could buy the first mountain only at level 40 for a lot of gold, but also because the quest tasks take a relatively long time and enemies actually pose a threat. If you accidentally hit two or three enemies at a time, you will reappear faster at Spirit Healer than you can tell Ironforge. Yes, the old English names came back. Farewell Ironforge. Hi Ironforge!

Collective Searches and Co. it can really go on because the opponents just don't want to leave the desired item – especially since you had to compete with other players for the opponents, because only the one who first attacked the enemy was the target. ,

In World of Warcraft Classic, you often have to wait for the resurgence of certain enemies as target targets. While waiting often groups arise, eventually only the player or the group receives the prey that first attacks the opponent.

In addition, because the recurrence times were higher, the questions often formed spontaneously, so as not to have to wait so long for the opponent. In the Classic Beta, this behavior was again observed.

There are no markers on the search regions on the maps. Available searches / search engines are also not visible, even if at least – unless you have completed a question. It must actually read the question texts and not immediately with each description make it "click".

Despite the slower pace, it is more important to explore the environment carefully, as there are often hidden searches or objects to be discovered on the map. It's all very original, to say the least, even relatively rough, unpolished and cowardly, especially if you know today's comfortable features, but now also take advantage of much of the game's appeal.

Of course, World of WarCraft Classic has been about enhancing its character, whether through talent points levels (from level 10), through new skills at the tutor's level, or, of course, through equipment – and there is a big difference in the reward. While in today's World of Warcraft: Battles for Azeroth are epic objects that are almost attacked without doing much for them, Classical Progress feels more valuable as they develop longer and harder than simply being cast. The ratio of "invested time" and "received reward" is quite another in Classic: more time, less reward. 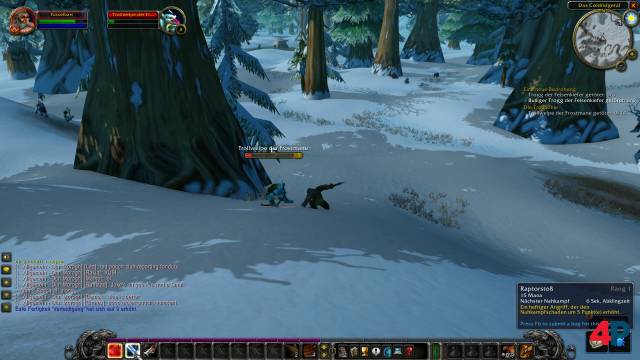 The Eisklammtal (starting area of ​​the dwarves) was once Coldridgetal and in Classical was much less than today.

This category also includes access points. So you had to gain access to various dungeons and even some discounts only through fairly long search ranks – something that was ultimately pushed to the extreme with the first "The Burning Cross" expansion.

Some of the worst changes with the numerous WoW extensions went through the classes, mainly through the retrospective (and all patch content) considered awesome World of WarCraft: Cataclysm. This not only means elimination of the talented trees that were usually executed in fixed patterns, but at least has choice and has promised steady progress to the cap level, but rather the peculiarities of the classes and their individuality.

The critical mark is broken