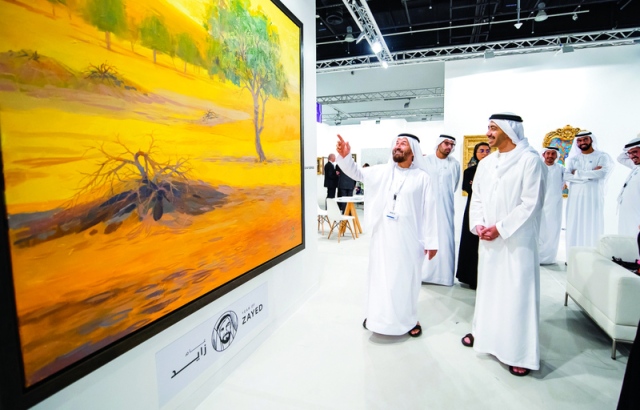 Under the patronage of His Highness Sheikh Mohammed bin Zayed Al Nahyan, Crown Prince of Abu Dhabi and Deputy Commander of the UAE Armed Forces, Sheikh Abdullah bin Zayed Al Nahyan, Minister of Foreign Affairs and International Cooperation, opened the 10th edition of Abu Dhabi Art Exhibition Which was organized by the Department of Culture and Tourism, Abu Dhabi, until November 17 at Manarat Al Saadiyat in Abu Dhabi.

Director of the Cultural and Cultural Council, Saif Said Gabash, Secretary of the Ministry of Culture and Tourism Abu Dhabi, Jacques Lang, President of the World Arab Institute in France, Richard Armstrong, Director of the Solomon Guggenheim Museum , And a number of dignitaries, officials and artists.

& # 39; dialog & # 39; Abdullah bin Zayed Al Nahyan said that the Abu Dhabi Art Exhibition reflects Abu Dhabi's status as an incubator of art. The exhibition is a simple example of the cultural diversity of the Arab Emirates. The following artistic expressions from different cultures have a rich place for dialogue and discussion within the country, enriching the human experience.

"Modern and modern art exposes the deepest aspects of human society, and it is only in an atmosphere that helps to explore and open cultures to ensure unlimited cultural exchange and knowledge, and Abu Dhabi continues to build its position on this issue," he added.

& # 39; Sheikh & # 39; Abdullah Ziad Al Nahyan toured the exhibition halls, where he toured the showrooms in Abu Dhabi 2018 and met with several artists and exhibitors who participated in their distinguished works this year.

"Over the past 10 years, Abu Dhabi Art has played a leading role in the artistic design of the Emirate of Abu Dhabi by presenting a diverse interactive program that includes creative and expressive art," said Hussein Al-Mubarak, head of Abu Dhabi's Department of Culture and Tourism. To different audiences.

"Abu Dhabi's Abu Dhabi Art and Culture Department was eager to attract leading artists from the UAE and beyond, and showcase the exhibition's activities inside and outside the Manara Saadiat galleries, to convey artistic experiences across the emirate, and the various international artistic trends that contribute to the establishment of Abu Dhabi as a center. Art and global cultural agenda. "

Abu Dhabi Art has a diverse program that provides an opportunity to connect to different segments of the community through a variety of artistic performances, community meetings and community initiatives, and a variety of artworks that reflect the artistic and cultural landscape.

"The art of Abu Dhabi attracts a number of leading leaders in exhibitions and art, museum directors and historians, as well as hosting art galleries that showcase their work in major exhibition areas.

Abu Dhabi Art offers a program of dialogues and discussions by influential figures in the art world, as well as a variety of live performances and works of art, both in the prevention of Saadiyat and Abu Dhabi to interact with the community and to highlight Abu Dhabi's contribution to various cultural and artistic fields.