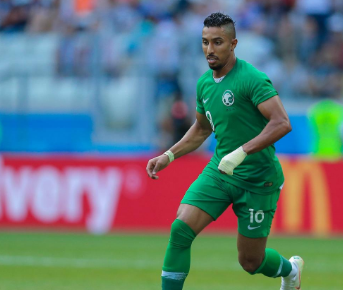 The management of the Al-Hilal Club, headed by Mohammed Ben Faisal, called for the renewal of the contract of international player Salem Al-Dosari at the present time, after returning from the Mechina camp.

Salim Al-Dosari is currently in Saudi Arabia in the preparatory camp to participate in the 2019 Asian Cup in the UAE next January.

The newspaper "Economic" in Saudi Arabia that the management of the Crescent has already begun negotiations with Salim al-Dosari to renew his contract before the end.

Salem Al Dosari's contract ends at the end of the season, where he can sign any other team during the next transfer window.

Prince Mohammed Salman for Asian Champions: "This is just the beginning and there are plans of the sports authority and the Federation of the ball interested in you and the future of Saudi football." ???

The same newspaper confirmed that the new contract of Salam al-Dosari with Crescent, will range from two to three years, where terms of the contract are now in negotiations.

The last meeting between Al Hilal and Salem Al Dosari ended in a positive way, with the player expressing a serious desire to renew the contract, but with several demands.

Salem al-Dosari presented a number of requirements for the management of the crescent in his new professional contract, which was understood by the management of Al-Halal and placed under the terms of the contract.