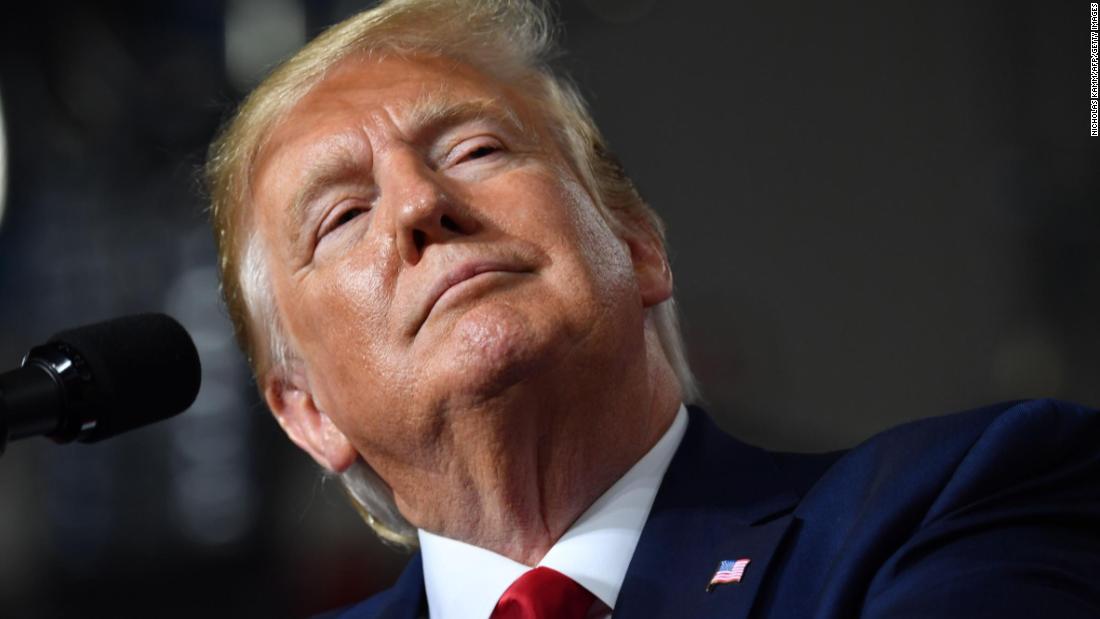 It was a tactic that worked: Trump announced the tariffs would be delayed until December 15.

It was a back-down amid a grueling trade war that Trump insists will eventually benefit Americans – and will prove its toughness on China. And while it caused markets to soar on Tuesday, gains were erased a day later amid new fears of an impending recession.

He's relying on a team that is often at odds with one another and has undergone multiple changes over the past several months. Trump now finds himself surrounded less and less by those who guided his administration's economic policy for its first two-and-a-half years as concerns about a recession grow inside the West Wing.

Trump and his campaign are counting on a robust economy to get him reelected. Voters who approve of Trump's performance in office say no. 1 reason why is because of the economy.

With reelection on his mind, Trump boasted about the stock market's recent performance during a rally campaign in New Hampshire Thursday night, where he asserted that even Americans who don't like him have "no choice but to vote" for him, or else the economy will collapse.

"You have no choice but to vote for me because your 401 (k), everything is going to be down the tubes," he told the crowd. "Whether you love me or hate me, you've got to vote for me."

The importance of the economy to its political future has long been an underlying theme of Trump's discussions with his team, people familiar with the conversations said, even as the make-up of that team changes over time.

His chief economic adviser Larry Kudlow, who is approaching two years on the job, is expected to leave in the coming months. His top economist Kevin Hassett exited with a promise to be "a resource … from the outside." He is fielding complaints from aides about Commerce Secretary Wilbur Ross, according to officials.

Trump has even lashed out at one of his most loyal Cabinet secretaries, Treasury Secretary Steven Mnuchin, over stalled trade talks with China, officials said. Mnuchin is dealing with an exodus of his own at the Treasury Department, with multiple top aides leaving in recent months.

Trump has since turned to more hardline aides such as Peter Navarro, the hardline trade and manufacturing adviser, who defends his tough moves on China and assures him there will be an economic rebound.

Trump has shown an affinity for aides with an eye toward the political implications of economic decisions rather than in-depth knowledge of economic policy, the people said. He's also grown annoyed at briefings when the discussion becomes overly technical or in the weeds.

Mnuchin, who headed the finance operation for Trump's campaign, remains the President's closest advisor on economic issues, according to people familiar with the team's dynamics, even as Trump complains about the lack of progress on trade talks that Mnuchin oversees.

That's partly because of its longevity in the administration, people said. But Trump also views his success in the private sector as an implicit testament to his economic advice.

When he was looking for a replacement for Gary Cohn, his first National Economic Council director, he was taken by Kudlow, who was a pundit at the time defending Trump's position on television.

Trump has also praised Navarro for his sometimes-combative appearances on television defending tariffs, including this week.

A team sometimes at odds

Trump is spending the week at his Bedminster golf course, but his economic team is scattered at other locations. Navarro is in Washington while Ross is in New York. Mick Mulvaney, the former budget chief who is now acting chief of staff, joined Trump in New Jersey.

Trump's chief economic adviser, acting Council of Economic Advisers chief Tomas Philipson, has only been in the top role for a few weeks after the departure of Hassett, who frequently defended his administration's position on television. Hassett's departure was seen as creating a void for those tasked with explaining White House economic policy, a White House official said.

And Mnuchin has been working from Washington but has largely remained out of public view. He joined a telephone call between Trump and the CEOs of JPMorgan, Bank of America and Citigroup on Wednesday as markets were tumbling amid recession fears.

Instead, Navarro has been the one defending the administration's position in public throughout the week. A hardliner on China, he has frequently opposed more mainstream views of economic policy in debates within the administration, and has clashed with Mnuchin during China trade talks.

On the airwaves, Navarro has amplified Trump's stance that market jitters are the fault of the Federal Reserve, which both Trump and Navarro believe is not cutting interest rates quickly enough.

That's not a universally held view in the West Wing, where many economic aides privately acknowledge the ongoing trade wars are more to blame for current economic conditions than anything else. But in conversations, most White House officials still cite the Fed as a contributing factor, knowing it's the view held by the President.

The White House is planning on having Kudlow, the National Economic Council director, appear on some Sunday morning shows to further explain the administration's position. And Vice President Mike Pence will deliver remarks at the Detroit Economic Club next week spelling out the administration's economic positions.

A senior administration official said Trump has been in regular contact with members of his economic team – including Kudlow, Mnuchin and Trade Representative Robert Lighthizer – from his working vacation in New Jersey this week.

While some officials described Trump as jolted by the recent recession fears that rocked the market on Wednesday, others said he did not appear deeply concerned that a downturn could materialize in the next two years.

Instead, he's been more focused on what such an economic event – or the appearance that one is imminent – may have on his political prospects. He expressed concern that a worsening trade standoff could harm the economy and ding his chances for re-election.

Though Trump's frustration at markets has been mostly directed at the Federal Reserve, people familiar with the matter say he's also vented that the team tasked with negotiating a trade deal with China has so far failed to strike a deal.

One such meeting occurred last week as the new tariffs Trump threatened to levy on China were causing uproar among retailers. At the meetings, Trump's advisers warned him that CEOs were prepared to vocally push back on the tariffs, which had been due to take effect in September and would have affected popular Christmas gifts such as cell phones and electronics.

Advisers appealed to Trump's affinity for the Christmas season, according to family people. Trump has boasted to rally crowds he saved the festive season from a politically correct "war on Christmas."

Trump tasked his team with finding a way to avoid a holiday shopping backlash, and advisers recommended delaying duties until December 15, when products on store shelves for the Christmas shopping season would have already shipped.

The decision to delay new tariffs on China came without any concessions from Beijing.

At the meetings, Trump also expressed hope the move would jolt US-China trade talks, which have proceeded haltingly since his meeting with Xi in June, much to Trump's frustration.

But that doesn't appear to have happened. On Thursday, China threatened to retaliate if US issues new tariffs on $ 300 billion of Chinese-made products. A statement from the Ministry of Finance did not mention the delay.

The resignation of Cathay Pacific C.E.O. Shows the Deep Power of China over Hong Kong Misery