Deadline 20/11, the Ministry of Transport reported to the Prime Minister how to deal with BOT deficiencies? 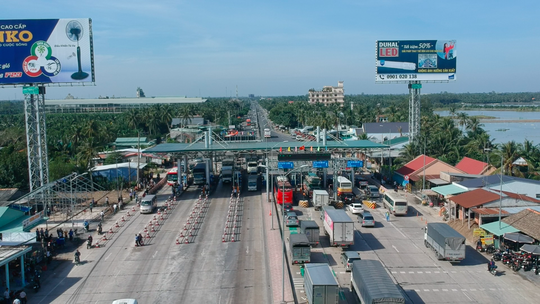 The location of Bai Cai Lay station is of national interest, especially people from the Mekong Delta – Photo: Le Pong

In the afternoon of November 20, the leader of the Ministry of Transport (Transport) journalists to the newspaper Employee Know today (20-11)

Specifically, Option 1: maintain the current station position, continue to reduce the total price for each vehicle through the station about 30% compared to the source. At this time, group 1 vehicles (4 seats) will be reduced from 25,000 to 15,000 Dong.

For the first option, at the press conference of the third quarter of the Ministry of Transport (transportation), answer questions about the treatment solution with the Cai Lay BOT station (Tianyuan District), Deputy Transport Minister Nguyen Ngoc this is the lowest of all BOT projects in QL1. At the same time, the scope of the exemption for vehicles in the area was extended. In the city of Cai Lay, there will be further reductions in Long Khan Ward 2. For Cai Be District, Komona Line, My Hoi commune will be reduced. 100% discount for buses and other vehicles not used for business; 50% discount on vehicles used for business.

According to the calculations, with this scheme, the repayment period of the project is about 15 years and 9 months.

Ministry of Transport analyzes this possibility with the advantage of not need to allocate the state budget support, at the same time reduce the part of the cost of transporting goods and travel expenses of the people. This project has also achieved important goals of the project is to reduce traffic congestion, road accidents, environmental pollution downtown Cai Lay. The downside is that the payback period has been extended.

With Option 2, the Ministry of Transport estimates the benefits of this option is to reduce some of the response of the user section. However, the cost of investment to build new stations at the new location is about $ 90 billion, the local area should allocate more space to the station. However, this option will lead to a state of means of transportation on the national highway 1, because the price on the national highway 1 is lower than the route, causing congestion, road accidents.

Earlier, Prime Minister Nguyen Chen Fook asked the Transportation Ministry to chair and coordinate with relevant government ministries, sectors and communities to examine BOT projects, and to provide solutions that are transparent, transparent and transparent to overcome recent shortcomings. , Trina Din, the Ministry of Transport and government ministries, branches and settlements settle the problems and shortcomings of the above projects, 11-2018.