Psychological disorders at school, students destroy themselves at home 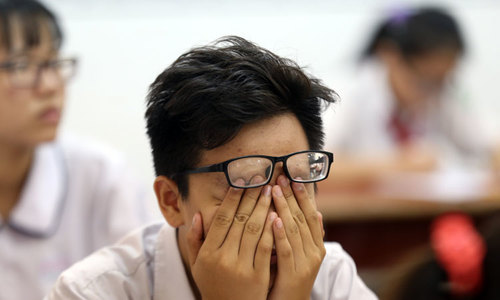 Destructive effects of high school students and contraceptives Is a study of the Ministry of Science and Technology – excellent on 12/11.

The project's chairman, Associate Professor Huina van Son (vice-rector of HCM Pedagogical University) said that there are many studies in the world about self-destructiveness at the same time. This is a mental disorder.

However, in the country, self-destructive studies are beginning to be concerned, classification and proposed solutions are not uniform. Therefore, the team has specific new points to utilize and conduct research.

"This study, if implemented, will be useful in school counseling, detecting and preventing abnormal behavior and preventing unfortunate outcomes," Ben said.

Home – the safest place to torture yourself

For two years (2016-2018), from 1,000 randomized students in 7 intermediate schools in HCMC and Dong, the team examined 280 children who exhibited self-destruction at different levels. The children did the act: self-mutilation, hair loss; Carving on the skin, biting, scratching, doing yourself; Hit me, hit myself; Knocking on the wall, tables and chairs, and seriously planning suicide and suicide.

Regarding the place of destructive behavior, the group puts the number of 214 (76%) at home.

"I was a victim at the beginning of grade 6, I do not know how just feel very upset, desperate and sometimes I hit my head on the wall, it goes on until parents discover violence and intervention in school," a letter – student HCMC said.

"I often take my hair off, I feel sad and alone in my house," said the male student, Dang.

"The most dangerous place is the safest place, I do not want friends looking at me with strange eyes because my behavior is sick. I'm afraid some of you will say the teacher is bigger, so I'm at home for safety," another student shared with the staff.

Similarly, quite a few children have been exposed to these behaviors when their parents are away from home or in their rooms because the house is the quietest place to think about what they are experiencing.

A small number of other students will choose public places such as theme parks, shopping centers, cinemas, parks to make their hair, knock their head against the wall, and fight themselves.

A thorough study of the current state of discovery and concealment of student behavior, which yields 208 results (more than 74%) shared with friends.

Vu (a student was interviewed by a research team), sad stories often shared with you because parents do not understand. "We often sit together to talk about the sad things, urgent with parents, teachers."

Wu's thinking is similar to three-quarters of the 280 self-destructive students, the tendency to expose this behavior to those around them. It's easier for them to talk to friends than to the rest of the group.

According to the research team, this is consistent with the main activity of junior high school students, who interact with friends – who hold a significant role in their communication era.

Some of the students also said they were greatly influenced by the general atmosphere of the group. When often admits urgency, sadness, team members tend to carry a negative situation, expressing the attitude to common difficulties and psychological stress they encounter.

The survey found that 54 (more than 19%) of the students admitted that their behavior was destructive to their parents, but 176 (63%) said they were hiding with their parents.

"Every time I confide in my parents about the pressure of learning, the teachers, at school, then Father scolded me for excuses for lazy school, after a few times I do not want to reveal it to my father," said the girl named Ngoc.

"The relationship between parents and teenage children often creates the most psychological conflict," the study confirmed. This is mainly due to the independent needs of children, arguing that they conflict with the parent's defense, protection and supervision idea. It mistakenly creates a wall that separates the children from the comfort of their parents.

This leads not only to the seriousness and seriousness of the adolescent, but also to the relationship between them and their parents.

Based on a study of facts, the team found that early intervention can help students reduce the potential for damage, thereby reducing the incidence of severe injury.

Families play an especially important role in identifying and assisting students with destructive behaviors. They are highly recommended to work closely with the school, especially teachers in mental health and adult education.

Parents should pay more attention and attention to their children's deficiencies, such as skipping meals, less communication, withdrawal … so that they have the right influence or behavior. In addition, they must avoid stress on their children's psychological well-being and encourage them to praise all the child's work and progress in learning and life.